GENESIS – A STEP AHEAD

After the diagnosis, and if none of the previous methods has not led to pregnancy, you have a new opportunity. Specifically, in specialized gynaecological hospital “Genesis”, in this case, you have a few new options, because we recognize the importance of cell, embryo and uterus genetics, believing that the future of sterility treatment lies in it.
Therefore, in cooperation with the most prestigious European laboratory for genetics, “Igenomix” from Spain, we were the first to introduce revolutionary methods of genetic testing and examinations that increase the success of IFV up to 80% in Southeast Europe. These are non-invasive, highly reliable and precise methods that specifically increase the chance for women over 40 years old to get pregnant.

In the beginning, the average age of patients was 32 and today it is over 36. Regardless of the increased average age of the patients, “Genesis” has kept its success rate of 50%, and in some periods it has risen to 60%.
The statistics of the Republic Health Insurance Fund ranks “Genesis” as the first hospital according to the achieved success within the national program of biomedical assisted fertilization, which justifies the trust the state placed in us. First of all, it justifies the trust of our patients.
A standard treatment, or as it is now more often defined – biomedical assisted fertilization (BAF), includes:

(We wrote more details on the IVF process in this text)

In vitro fertilization IVF involves bringing an egg cell and a sperm cell together in a laboratory, “in vitro” means “outside the body “, whereas” fertilization means insemination. This is one of the methods of assisted reproduction, which is applied in the case of a reduced number of sperm cells with appropriate progressive motility. 100,000 sperm cells are put in a close contact with the egg cell. The best sperm cell finds its way to get to it and fertilizes it.

This is a process of intracytoplasmic sperm cell insertion. In this method, unlike in conventional IVF, one sperm cell is selected by means of a special microscope and placed into the egg cell.

This technique of fertilization is carried out in case of bad quality of sperm and small number of sperm cells or after testicular puncture in case of azoospermia (when there is no sperm in the ejaculate). It is also applied to couples whose IVF treatment has not been successful.

The chances of pregnancy by this method are from 40 to 45%.

It is a method that is applied within the IVF and ICSI methods before embryo transfer. During this procedure a tiniest possible opening on the embryonic membrane (Zona pellucida) is made by a laser using a micromanipulator. In this way embryos are released from embryonic membranes and this increases the effectiveness of implantation, and helps the implantation of the embryo into the endometrium and pregnancy development.

The reasons for the implementation of this method include: stiff embryo, membrane, the lack of enzymes needed to naturally open the embryonic membrane, the age of women

In this way, the embryologist observing the speed and manner of division of the embryonic cells finds it easier to select higher quality embryos, those embryos that have the greatest potential for implantation (implantation in the uterus).

It has long been known that the time that elapses from the fertilization of an egg cell to the first cell division is a parameter that has a predictive value in assessing the quality of the resulting embryo.

With this system we can constantly keep track of how all, and not just the one, embryos are developing. Thus we get more information to help us choose the best quality embryo and therefore the chances of pregnancy can significantly increase.

When it comes to the process of implantation of fertilized eggs cells, our embryologist Balazs Baly, BSc MSc has been using EmbryoGlue that, as it has been confirmed, increases the number of pregnancies and the number of births, for several years.

EmbryoGlue is a medium – “glue” for tissue that mimics the natural process in the uterus which take place in the course of natural embryo implantation. EmbryoGlue facilitates the process of implanting an embryo in the uterus.

According to a study from 2008, the use of EmbryoGlue for in vitro fertilization procedures has increased the pregnancy rate from 48% to 54.6%. According to the results of the study of Dr Basak Balabanov, presented at a conference of the European Society of Human Reproduction and Embryology (ESHRE) in 2011, the percentage of born babies increased by 11.2% due to EmbryoGlue.

EmbryoGlue contains carbohydrates and amino acids that sustain the embryo during the transfer and “implantation” in the mucous membrane of the uterus, hyaluronan, a recombinant albumin which reduces the risk of cross-contamination.
Hyaluronan reduces unwanted movement of the embryo. During natural pregnancy, the natural concentration of hyaluronan in the uterus increases. Consequently, the presence of this substance in the process of assisted reproduction is extremely effective. Thanks to the high concentration of hyaluronan, EmbryoGlue “glues” the embryo to the uterine wall. Hyaluronan also densifies EmbryoGlue which is in the form of a solution, and gives it viscosity similar to that of the fluid in the uterus. The result of this process is the reduction of unwanted motility of the embryo.

This method is used to extract sperm cells from the testicular tissue in cases in which there are no sperm cells in the ejaculate (azoospermia). The method is painful therefore we carry it out in the short term-venous anaesthesia. After testicular puncture and sperm cell selection, fertilization of oocytes is then carried out by the ICSI method.

The cryopreservation of embryos is performed if a number of high-quality embryos (more than two or three embryos) are obtained after the IVF / ICSI procedure. The embryos are frozen at a temperature of – 196 C either during the early stage of development (2 to 8 cells on the second or third day of embryonic development) or at the blastocyst stage (the fifth day of the embryo development).

The process of freezing and thawing is strictly controlled. Frozen embryos are stored in special containers with liquid nitrogen, each is appropriately labelled with data about the origin, date, and the division phase at the time of freezing. Precise and parallel records are kept in protocols with accurate information about the location in which the embryos are stored.

The embryos are kept in the frozen state until patients want to use them.
After thawing the embryo and embryo transfer, success rate in our institution is 38.6%

Sperm cells are to be frozen in case the partner is unable to be present during the IVF/ICSI process.

A sample of sperm cells is stored in special containers, in liquid nitrogen at – 196 C, and it is appropriately labelled with data on origin, time, date, and the quality of the sample on the day of freezing.

Sperm is also being frozen at the request of the patient before surgery, the radiation of testicles or chemotherapy.

Our hospital offers the possibility of freezing oocytes.

This test allows us to, before implantation, analyse all 24 chromosomes, do genetic screening for aneuploidy (chromosomal abnormalities) and identify a healthy embryo to be used in the IVF treatment.

Genetic abnormalities are a common cause of early spontaneous defects in the first trimester of pregnancy. These methods help us to prevent such losses.
PGS method focuses on the chromosomes that carry information about the disorders and allows us to choose to transfer only those embryos that are chromosomally good.
By using PGS screening test the successfulness of IVF treatment may be doubled!
150% in older women
132% in case of problems with implantation
71% in case of repeated miscarriages
64% when the cause of the issue is the male infertility
What are the benefits of PGS test?
Most of abnormal embryos cannot be examined under a microscope and thus cannot be differentiated from healthy embryos. Therefore, the appearance of the embryo cannot only be used as a criterion for the detection of chromosomal abnormalities.

Who is exposed to increased risk when it comes to the development of abnormalities in the number of chromosomes?

Main advantages of PGS include: an increase in implantation rates, reducing the rate of miscarriages and increasing the chances that couples will give birth to healthy children.

Embryo biopsy is done with a laser and sent to genetic testing in the most influential genetic laboratory “Igenomix” from Spain, which chose hospital “Genesis” from Novi Sad to be the first in Southeast Europe to introduce the most advanced non-invasive prenatal genetic test.

PGD is Preimplantation Genetic test to analyse disorders at the level of genes. This is a highly-reliable test that can be performed during the IVF treatment. In this way, embryos at risk to develop a serious genetic disorder are tested. 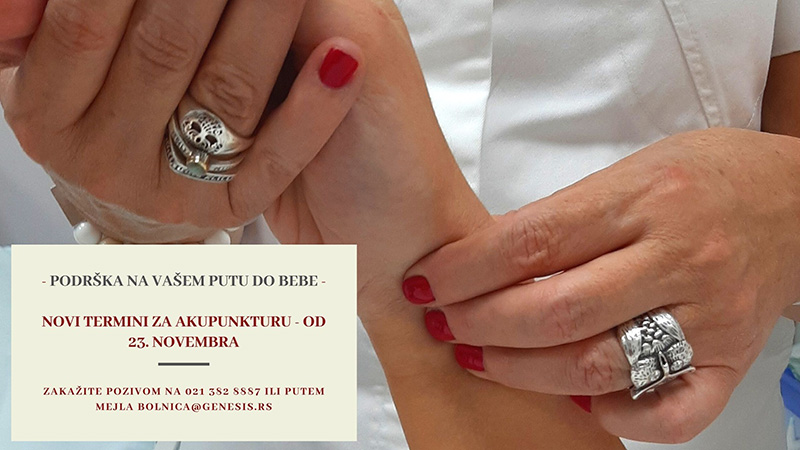